I met Erika online through Katherine Stone over at Postpartum Progress. We were asked to participate in a Mother’s Day Rally together. From there, we kind of clicked as we both have had a similar experience with one of our children and occasionally lean on each other for support in that department. And then there’s our passionate love of college football. I’m humbled to have Erika writing here today about Postpartum Depression. She addresses the after-effects of PPD with power and eloquence. I hope you enjoy her piece and have a wonderful weekend!

Health problems sometimes have lingering effects long after treatments are given. For example, I know personally that once you get bronchitis you have a much better chance of having asthmatic symptoms every time you get an upper respiratory illness or the humidity changes a lot. I never had a problem with this until my daughter shared her bronchitis with me a few years ago. I haven’t gotten bronchitis again, but I can’t get too far away from its affect on my life ever since.

The same seems to be true of postpartum depression for me. Between 2000 and 2003, I had postpartum depression and premenstrual dysphoric disorder (like PMS with depression symptoms) following two of my three pregnancies. I eventually got treatment before my third pregnancy, but I still feel the lingering effects of those two problems at times.

During my periods of depression, I had the typical symptoms – crying, low self-worth, negative self talk, withdrawal, etc. Now I find that my anger can burst forth more easily than it used to. When I might have turned inward during my depression, I now turn outward. That’s not an entirely bad thing because my emotions aren’t bottled up. But it can go too far more quickly than I want to admit. I get mad at the dog, my kids, my husband, myself, and so on.

The bigger problem is that this gets noticeably worse during my premenstrual time. Still. After nearly ten years. And I’m using a birth control pill that has helped control the symptoms. I haven’t been honestly depressed in almost a decade and I yet I can’t escape its long term effect entirely.

My point is that in order to get your best quality of life after dealing with depression, you need to really understand how it can affect you after you’ve handled the major symptoms. The stigma surrounding mental illness can be disheartening and confusing. Get it treated, but maybe don’t talk about it so much after that. Or better yet, just get it fixed and don’t pull anyone into an awkward conversation about it. You don’t want to look too selfish or get too much sympathy. Or be seen as incompetent or untrustworthy. And geez, it’s been years, why aren’t you over that?

Here’s the reality – the sooner you treat it the better. And it’s never too late to get treatment because late is still better than never. I firmly believe I would have fewer problems with my long-term effects if I had gotten treatment within a few months instead of waiting nearly three years. The depression would have had less time to make a deep impression on my mind and body. But still, treatment made a critical difference in my life. I don’t truly know how I’d be living if I had to try digging out on my own. 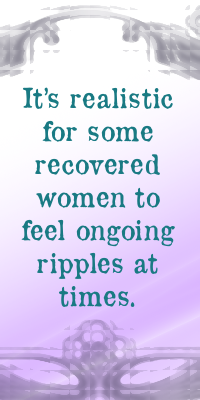 Here’s the good news! These lingering effects don’t necessarily have to make you miserable all the time. I don’t have many conversations about these issues now. I do speak to my doctor at times when my symptoms needed better management, and I find it very helpful to write articles like this or do some public speaking about postpartum depression. I’m also able to handle those tough emotional moments in the moment and recognize what I need to do from there. I don’t allow myself to make my depression history an excuse, but I do recognize the roots of my emotional issues.

Many many women get through postpartum depression and recover well. But it’s realistic for some recovered women to feel ongoing ripples at times. It doesn’t mean you didn’t do a good job of getting through it or that you are broken as a person. That’s just depression for you. It’s a serious condition and requires treatment like many other health problems.

You probably wouldn’t beat yourself up because you had to use a nebulizer years after getting a bad case of bronchitis. You need to give yourself the same break after dealing with postpartum depression. Find what works for you to handle those emotional moments, the negative self-talk, the excess anger, the regrets, or whatever makes you feel stuck again. Develop good self-care habits like regular meals, frequent exercise, lots of social support, and other emotional outlets. When something comes up, you’ll be well-equipped to handle it.

Take care of your mind and body, learn how to recognize your needs, and keep moving forward each day. By the way, it’s mid-October and that means cold season. I’ll be going all out to keep germs away from my lungs, and to be kind to myself when they sneak in anyway.

Erika Krull is a freelance writer and part-time therapist in central Nebraska. She has been married to her college sweetheart for 17 years, stays busy raising three energetic girls and a bouncy puppy, and is still learns so much every day. She writes for the Family Mental Health on psychcentral.com and does local public speaking events about postpartum depression upon request.